Birmingham may not be everyone’s first choice as a tourist destination, and to an outsider it’s easy to see why — a sprawling conurbation with a concrete centre. Diverse, lively and friendly, Brummies are proudly defensive of their city, and there are some nice patches, particularly away from the obvious centre.

The City of Birmingham metropolitan borough as it stands today encompasses a very large array of former towns and villages surrounding the original town of Birmingham, that have been incorporated into it over the years. Some of the more known districts and wards of Birmingham include Aston (home to the Aston Hall and Aston Villa football team) Edgbaston (where the main campus of University of Birmingham is located), Longbridge (with the MG factory) and Selly Oak (secondary campus and student town).

The city centre of Birmingham officially falls into the ward of Ladywood, which itself has little to do with the actual centre. Other areas in the metropolitan borough include Perry Barr, Sutton Coldfield and Moseley. The centre of Birmingham is confined by a motorway ringroad officially called A4540, also called the Middle Ring Road. There was also the Inner Ring Road, or rod 4400, which was viewed as an urban planning failure and parts of it were dismantled and redeveloped. The extant part is now road A38 and runs across the city centre, partially underground.

The very central point of Birmingham is arguably marked by the huge New Street railway station, with tracks leading to it bisecting the centre. Next to the New Street station is the huge Bullring shopping centre, which is also an orientation beacon and leads up all the way to another railway station called Moor Street.

Birmingham International Airport (BHX) is located about 10 kilometres southeast of Birmingham and, after several airports in London and Manchester Airport, is one of the busiest airports in the UK. There are a few options as far as getting to and from the airport. 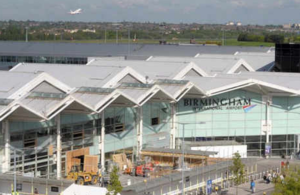 Birmingham Airport is accessible from the north and south via Junction Six of the M42 motorway. From Birmingham city centre, the A45 runs directly to the airport. Taxis and rental cars are widely available at the airport. To avoid traffic, delays and parking issues, many people opt to travel in style and use the services of an executive airport transfer service such as Cars Exec. A chauffeur service is less costly than most people realize, and serves as a great way to eliminate much of the stress so often associated with airport transfers.

Birmingham’s city centre is partially pedestrianised and has several unintuitive one-way systems. A car is a viable way of getting around the city and other areas, but a good map or sat-nav is essential. Birmingham City Council produces a map of city centre car parks (available from tourist information offices). Expect to pay £1-1.50 per hour in Pay & Display areas and more on street meters. Parking attendants patrol popular areas regularly, so expect a fine if you return late or a clamp if you’re parked illegally.

If driving about in unfamiliar territory isn’t to your liking then consider hiring a chauffeur service. The same Cars Exec mentioned above for airport transfers works here, as their chauffeurs also are available for tours in Birmingham (as well as just about any major city throughout the UK). 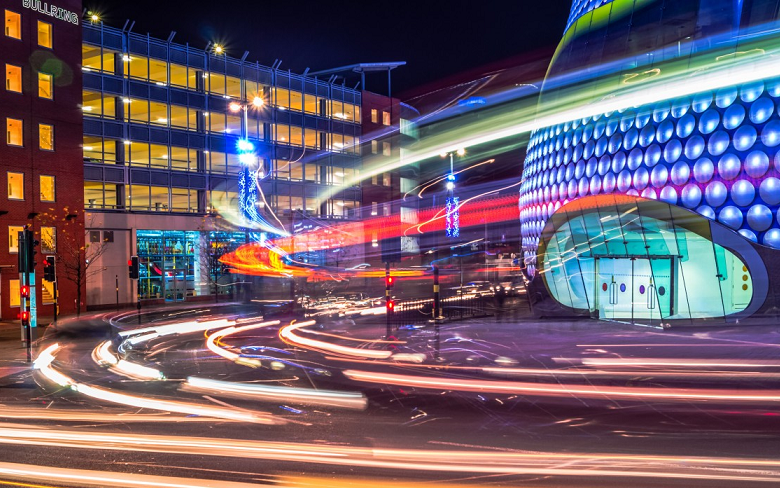 Visitors would enjoy the delightful walk from the International Convention Centre (ICC) and the Symphony Hall on the top of Broad Street to the Bull Ring shopping complex, which takes around twenty minutes and may involve only one easy surface road-crossing. From the ICC, you walk east by the Repertory Theatre and Library of Birmingham in Centenary Square; then through the Paradise Forum to Chamberlain Square; with the Museum and Art Gallery to your left and the Class I listed building, the Town Hall, on your right, you make your way to the spacious Victoria Square.

At Victoria Square, you will find the Town Hall to the west, the Council Offices to the north, and the Post Office to the South; the path you want to the Bull Ring is east, down New Street, which is a pedestrianized street lined with shops, stores, and kiosks.

About five blocks down New Street, you will come to a signal at Corporation Street, the only road crossing you need to make on this walk. A few blocks later, New Street will turn into Rotunda Square. Bearing south towards St. Martin’s Church, you will find the 21st-century Bull Ring Shopping Complex to your left and right.

Birmingham has a large canal network. In the city centre, extensive development has enhanced the environment and level of amenities around these canals, making them excellent pedestrian routes in their own right. Visitors would enjoy the peaceful ten-minute car-free canal stroll from Brindleyplace, National Sea Life Centre, and Sherborne Wharf, all next to the ICC, eastward under Broad Street, through the Gas Street Basin, to The Mailbox (the former Royal Mail’s Birmingham head office turned into shops and restaurants).